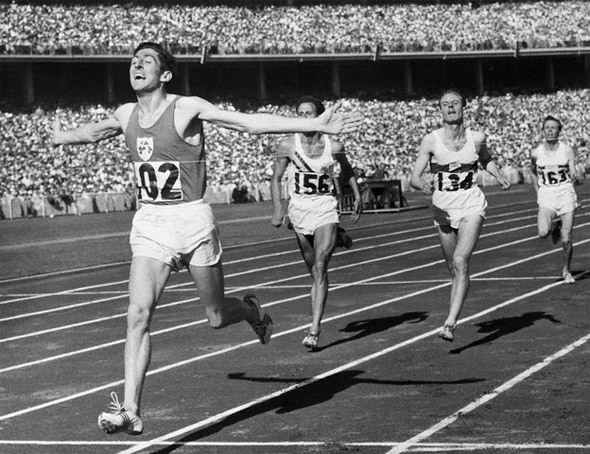 Olympic Gold medalist runner, Ronald Michael Delany was born in Arklow, County Wicklow on March 6, 1935. Delany showed promise as a schoolboy athlete and in 1954 at age 19 had a breakout year setting multiple Irish records in the half-mile and securing a place in that event in the European final in Berne.

Following his success in the European championships, Delany took up a scholarship at Villanova University in Pennsylvania. He trained under legendary coach Jumbo Elliot where he transitioned to the longer mile event.

By 1956, Delany had become a significant force in American collegiate athletics garnering an NCAA title and becoming the seventh man to break the magical 4-minute mile mark. Following his college season, he returned to Ireland for the Summer having secured Olympic qualifying times only to be hit with an injury leaving him questionable for selection for the Melbourne Olympics. Fortunately, the Olympics was being held late in the year due to its Southern hemisphere location and so Delany had time to recover while he trained at Villanova in the Fall of 1956.

Fortunately, the Irish selectors decided to take a risk on Delany's uncertain form but in truth, Delany had been training well in Villanova and arrived in Melbourne in the best condition of his life. He advanced comfortably through the semifinal heats on December 1 lined up with 11 other men in the final. Delany ran conservatively lurking towards the back of the field, with 300 meters to go he unleashed an unanswerable kick and crossed the line an easy victor in a new Olympic record. He is one of the only three Irish men to win an Olympic Gold medal in track and field and is the most recent to hold that distinction