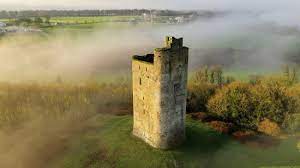 More than a decade of war raged across Ireland from 1641 - 1653. the Irish historian, Padraig Lenihan estimates that 20% of the Irish population perished in this conflict - some 200 thousand of the 1 million estimated to inhabit Ireland at the outbreak of the conflict.

There is disagreement over the name for this conflict, some refer to it as the Irish Confederate Wars, others the 11 Year's War. Some would argue that the war was three separate conflicts comprised of the Irish Rebellion (1641 - 1642), The Confederates' War (1642 -1648) and the Cromwellian War (1649 - 1653). Regardless of the name, Ireland was devasted and the name of Oliver Cromwell, the bete noire of the final phase of the war, is invoked, to this day, with deep animosity by many Irish people.

Some 600 Royalist men died that day. There would be much more bloodletting before this extended conflict drew to a close and a devastated Ireland would be totally remade